When I randomly opened the floor to all sorts of adoption questions several weeks ago I was surprised by how many serious and in-depth questions I received. I’m sorry it has taken me to long to begin this series, but I’ve struggled trying to figure out how and how often to fit this subject into my blog, which is usually focused on my current life, books, some travel, and exploring places near where I live.

Sometimes talking about my experience and the subject of adoption in general can be emotionally exhausting. Because of this, I do not want to make adoption a main focus of my blog, and cannot guarantee that this will be a topic I bring up frequently. If you have come to my blog as a new reader because you are looking for more information about adoption, please enjoy this series, but don’t stick around expecting it to become a major topic of discussion. (I hope you will enjoy my blog for what it is as a whole and stick around anyway! I blog about books I’m reading, what I’m up to, and throw in a few city guides sometimes!)

Anyway, because this isn’t a topic I’ve approached very much at all, it makes sense to start this series with the questions I’ve received asking me to explain more about my own adoption story before I start delving into deeper subjects. (Seriously guys, some of these questions are so hard!)

As a disclaimer, I’d first like to mention that I am in no way, shape, or form a psychologist. Besides researching adoption-related things on my own and taking a few psychology classes in college, I am not licensed to give any clinical advice pertaining to this subject. Please take this series for what it is: an adoptee using my own experience to discuss this subject in my own way.

Q: I’d love to hear your take on what it was like to be adopted, how you found out you were, etc… I’d especially like to hear more about your birthmother and your relationship, thoughts, and feelings toward her.

A: I’m twenty-nine years old now, so I hope you’re ready for a long answer! haha

I was born in October 1986 and adopted as an infant, domestically, through closed adoption. Adoption in Virginia wasn’t “open” until the mid-90’s, which means that my birthmother and parents did not have the option to communicate or know any identifying information about each other. My records were sealed away by the state until I was eighteen and my original birth certificate looks like this: 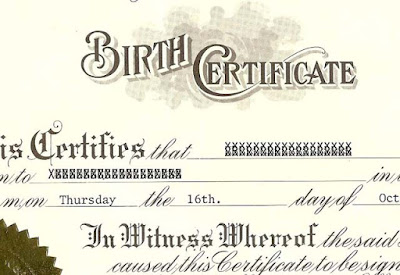 This is just a small snippet, but those X’d out parts are actually on my birth certificate. It has looked like that since the day my parents received it. I did not do that for the sake of this post. I have a second “official” birth certificate with my legal (adopted) name on it that I use for official business, like obtaining a drivers license. Of course, I now know what was originally typed there.

I grew up in a wonderful family who never hid my adoption from me. I can’t tell you when I “found out” about my adoption, because it was something I always knew. My mom read me children’s books to better explain it to me and both of my parents tried to answer the best they could when I had questions.

My birthmother was only sixteen at the time she had me, and in the eighties teen pregnancy was often responded to with being “sent away” to have the child, which was most often placed for adoption. This is all that I will include about my birthmother because I respect her privacy and feel that it isn’t my place to tell her story. Not to be harsh or anything…but that’s just the way it is. I have pretty serious feelings about people telling other peoples’ stories online.

Until I was much older, I never thought that my adoption affected me in childhood. I will go further into this in future questions. I did begin to recognize that I had issues related to my adoption later in adolescence, specifically around the time that I turned about fifteen. Being a teenager is hard, but I began to understand that many of the insecurities and difficulties I was facing were directly tied to my missing identity and not simply some average teenage angst.

I specifically remember fighting with my mother once when I was sixteen about something and leaving the house in a rage, but I can’t tell you today what that argument was about. All I remember was that when I came home we had a heart-to-heart and she handed me that marked-out birth certificate and two photos of a girl I’d never seen before. I immediately understood that this was my birthmother. It was the first time I saw another face that looked anything like mine. I don’t know how or where she got the photos, to this day; maybe she’d had them all along.

Adoption wasn’t something I necessarily dwelled on until it was brought up. Middle school is when I began to first realize that my adoption made me different than everyone else around me. The only other adopted person I knew was my little brother (different birthparents), and with our shared family and shared experience, we both only knew as much as the other at that age.

The first time my adoption bothered me was when we started learning about genes in science class. A simple seventh grade class assignment to plug our parents’ traits into punnett squares left me staring at the paper in front of me, unable to explain to my teacher why I wasn’t completing the assignment and too embarrassed and afraid to bring it up. I faked it. Luckily, the idea that my father’s black hair and my mother’s red hair could mix and result in brown hair like mine wasn’t too far fetched. I leaned upon that idea for years, recognizing (and hoping) that my similarly-featured brother (same hair color, same eye color, total coincidence,) and I could totally pass for Kenny and Peggy’s biological children…right?

Of course my closest friends knew. We discussed adoption often, and they would frequently bring it up after exercises in class that would bring it to mind. I always felt 100% comfortable talking about adoption with these wonderful friends, and we would often discuss the ideas I’d had about my identity and all of the potential answers to the questions I had about it.

I petitioned the state of Virginia to open my adoption records immediately when I turned eighteen. I had always wanted to make contact with my birthmother and was excited to fill in some of the gaps that closed adoption had created in my life. After the state of Virginia had approved to open my files, I was required to go through the agency I was adopted through to obtain any information. In fact, I never received anything from the state; they sent it all to my agency. I never held the files or sorted through this identifying information about my birthmother myself. Even though I had permission to make contact, I wasn’t allowed the opportunity to do it on my own.

First, my agency had to contact my birthmother to let her know that I had asked to initiate contact. With her permission, I was allowed to write a letter to her, which my agency sent to her. I anxiously waited months to see if she would respond; it was up to her whether or not to contact me in return. Several months later I received a letter full of photos and information. Over a decade later, we remain in contact through Facebook and email, but have never met in person or spoke on the phone.

Things are so different now that adoptions are open. We’ll save that subject for another day.

I have never had anything but wonderful things to say about my birthmother. I was never angry at her for her choice and have never had any bad feelings towards her. As I became a teenager, I came to understand her situation more and more. If anything, I felt sorry that she had experienced such a devastating thing at such a young age. I was always told that her choice to place me was a direct result of her love for me. I now understand that it was much more complicated than that (it always is) but my thoughts on the situation and towards her remain the same.

I have not “found” or made contact with my biological father in any way.

This is a very simple explanation of my adoption story, but it of course goes much deeper than this. Adoption goes back and forth between being something that definitely shaped my identity in a significant way and something that seems more like a footnote. I’m excited to answer more of the really in-depth questions that some readers asked me as I continue this series.

– – – – –
Please be kind in the comments. If you have any questions pertaining to adoption that you would like me to answer or explore further (through email or in a post like this), please email me at embusyliving[at]gmail[dot]com.