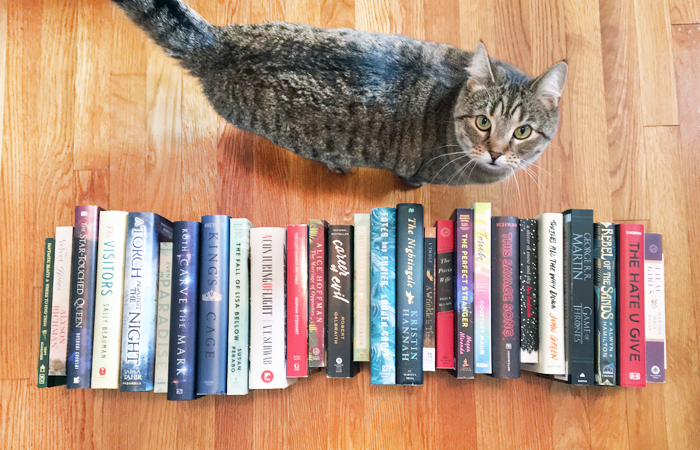 If you’re looking for reading recommendations for 2018, look no further. I read 29 books last year surpassing my Goodreads Reading Challenge goal of 25.

PS – If you click through to read any of my reviews, I promise no spoilers. I wouldn’t do that to ya!
Post contains some affiliate links. Click to learn more.

Books I read by Category:

Favorite Book from Each Category:

This year didn’t have a stand-out favorite, for me. Last year it was really easy to choose, because I raved over my choice to everyone, but this year I feel that way about a few. I think the two I’m torn between the most are “A Conjuring of Light” and “The Hate U Give,” both for different reasons:

Alice Hoffman has been publishing books since the seventies, but “The Marriage of Opposites” was the first book of hers that I have ever read. I really enjoyed her writing style and am glad there is a vast collection of her work to choose from in the future. I picked up a copy of The Ice Queen at on the discount table at Barnes and Noble during the holidays and can’t wait to read it this year. Are there any other Hoffman books you recommend? You can read my review for “The Marriage of Opposites” here.

I really enjoyed “Rebel of the Sands.” The best consolation for being late to the game on this one is that the second book of this series, “Traitor to the Throne,” has already been published and book three, “Hero at the Fall,” is set to release this March! You can read my review for “Rebel of the Sands” here.

I had a lot of issues with “The Fall of Lisa Bellow,” and I’m certainly not the only one. Of all the books I read last year, this is the one I recommend you don’t pick up. I think at some point I even told Dan I might just burn my copy—harsh words from a bibliophile—because I didn’t want anyone else to read it if I donated it, etc. You can read my review of “The Fall of Lisa Bellow” here.